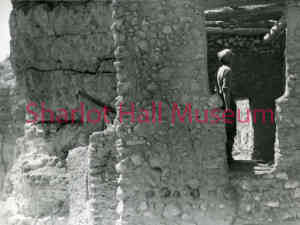 Montezuma Castle National Monument preserves dwellings built by the Southern Sinagua culture between 1100 and 1425 CE.  The Sinagua were the group of people who lived in the dwellings at Montezuma Castle and Tuzigoot. Although people were living in the area much earlier, the Sinagua began building permanent living structures – the dwellings you see at the monument – around 1050 CE.

The name “Sinagua” comes from the Spanish “sin agua,” meaning “without water.” Despite the name, the Sinagua actually had plenty of water. The group was named by Harold S. Colton in 1939, after the San Francisco Peaks, where Colton first identified the culture. (The peaks were called “sierra sin agua” by early Spanish explorers because they lacked rivers and streams.)

Montezuma Castle is situated about 90 feet up a sheer limestone cliff, facing the adjacent Beaver Creek, which drains into the perennial Verde River just north of Camp Verde. It is one of the best-preserved cliff dwellings in North America, in part because of its ideal placement in a natural alcove that protects it from exposure to the elements. The precariousness of the dwelling's location and its immense scale of floor space across five stories suggest that the Sinagua were daring builders and skilled engineers. Access into the structure was most likely permitted by a series of portable ladders, which made it difficult for enemy tribes to penetrate the natural defense of the vertical barrier.

Perhaps the main reason the Sinagua chose to build the Castle so far above the ground, however, was to escape the threat of natural disaster in the form of the annual flooding of Beaver Creek. During the summer monsoon season, the creek frequently breached its banks, inundating the floodplain with water. The Sinagua recognized the importance of these floods to their agriculture, but likely also the potential destruction they presented to any structures built in the floodplain. Their solution was to build a permanent structure in the high recess afforded by the limestone cliff.

The walls of Montezuma Castle are examples of early stone-and-mortar masonry, constructed almost entirely from chunks of limestone found at the base of the cliff, as well as mud and/or clay from the creek bottom. The ceilings of the rooms also incorporated sectioned timbers as a kind of roof thatching, obtained primarily from the Arizona sycamore, a large hardwood tree native to the Verde Valley.

Evidence of permanent dwellings like those at Montezuma Castle begins to appear in the archaeological record of Arizona's Verde Valley about 1050 AD. The first distinctly Sinagua culture may have occupied the region as early as 700 AD. The area was briefly abandoned due to the eruption of Sunset Crater Volcano, about 60 miles to the north, in the mid-11th century. Although the short-term impact may have been destructive, nutrient-rich sediment deposited by the volcano may have aided more expansive agriculture in later decades. During the interim, the Sinagua lived in the surrounding highlands and sustained themselves on small-scale agriculture dependent on rain. After 1125, the Sinagua resettled the Verde Valley, using the reliable watershed of the Verde River alongside irrigation systems left by previous inhabitants, perhaps including Hohokam peoples, to support more widespread farming.

Construction of the Castle itself is thought to have begun around this time, though the building probably was gradual, level-by-level, over many generations. The region's population likely peaked around 1300 AD, with the Castle housing between 30 and 50 people in at least 20 rooms.  A neighboring segment of the same cliff wall suggests there was an even larger dwelling around the same time, of which only the stone foundations have survived. Its discovery in 1933 revealed many Sinagua artifacts and greatly increased understanding of their way of life.

The latest estimated date of occupation for any Sinagua site comes from Montezuma Castle, around 1425 AD. After this, the Sinagua people apparently abandoned their permanent settlements and migrated elsewhere, as did other cultural groups in the southwestern United States around that time. The reasons for abandonment are unclear, but possibilities include drought, resource depletion, and clashes with the newly arrived Yavapai people. Due to the very little human contact since abandonment, Montezuma Castle was well preserved.