As soldiers, miners and others flooded the newly discovered gold fields in the central Arizona Territory, the food supply, particularly of meat, became stressed as local wildlife disappeared. Beef in particular was very desirable and expensive. In December 1863, the U.S. Army brought 500 beef cattle and 700 working cattle with them when they established Fort Whipple at Del Rio Springs, sparking the cattle ranching industry in Northern Arizona.

Early ranchers in Lonesome Valley (which now encompasses Chino Valley, Prescott Valley and Dewey-Humboldt) grazed their cattle throughout the valley on open range. The cattle roamed freely, intermixing without regard to ownership. The roundup (or rodeo in Spanish) enabled the cattle ranchers to systematically gather and segregate their cattle from those of other ranchers using the same open range.

Thomas Sanders, who arrived in the spring of 1877, leased out three hundred head of cattle and took them east of Prescott to his Coyote Springs Ranch in Lonesome Valley. In his book, “My Arizona Adventures: Recollections of Thomas Dudley Sanders; Miner, Freighter, and Rancher in Arizona Territory”, he explained that cooperation between ranchers whose cattle shared the open range led to the rodeo or roundup. He went on to describe the rodeo planning and operation in some detail. They were normally planned a month or so before the actual event. During the planning, ranchers attending the sessions would choose a rodeo captain and a location to hold the rodeo and corral the cattle. They would also establish a community fund from which the expenses of the rodeo were paid. These expenses  included the “chuck” bill and the salary of the  cook, who was hired for his experience and who had several responsibilities in addition to cooking meals. He also drove the chuck wagon and herded the saddle horses and any strays. 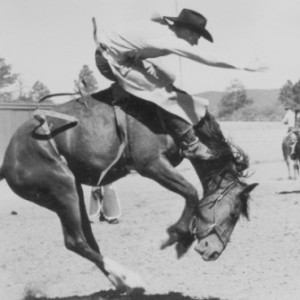 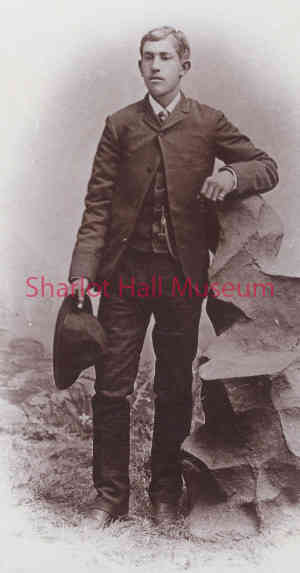 The Weekly Journal Miner often reported on the cattlemen’s activities and announced cattle rodeos. On May 15, 1885, the Weekly Journal Miner noted that “Ed Carpenter left this morning to attend the rodeo in Chino Valley ” and “A large number of the citizens of Prescott are absent, attending rodeos in various parts of the county.” The September 7, 1887 edition of the paper contained a “Notice to Stockmen” that “Campbell & Baker will commence a cattle rodeo at their Verde ranch, Monday, September 5th (sic).  All parties interested are requested to be on hand. Expect to be in Chino Valley about the 20th.  C&B”

In July 1888, Prescott merchants and businessmen sponsored a “Cowboy Tournament” with cash prizes so local cowboys could demonstrate their steer roping and bronco riding skills to the townsfolk. On July 4, 1888, the Weekly Journal Miner urged “ Everybody should attend the cowboy tournament at the race track on Thursday (July 5, 1888).”  On  July 11, 1888, the newspaper reported that “Juan Libas”(sic Leivas) had won the steer roping and tying contest receiving a prize of a $125 saddle. He was also awarded a Citizen’s Prize Badge for best overall cowboy.” In 1924, the Cowboy Tournament was renamed the Prescott Rodeo and billed as the oldest continuous rodeo in the world.