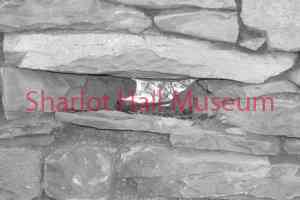 View through a gun port of the Wales Arnold stone cabin in Arizona.

Wales Arnold (b. 1837 - d.1913) was born April 6, 1837 in Massachusetts/died May 21, 1913 in Prescott. Arnold served in Company F. of the California Infantry and came to Arizona Territory in 1863 as an Indian Scout for General George Crook. He married Sarah Jennie Wells on October 24, 1869 in Prescott, Arizona Territory. Sarah (Wells) Arnold ( b.1846 - d. 1909) was born 1846 in Ohio/died November, 1909 in Prescott. She came around Cape Horn to San Francisco and then to the Aqua Fria Valley of Arizona before 1869. Called "Auntie" Arnold, she and Wales moved to the Verde Valley, or Fort Lincoln (as it was known at that time), after their wedding. In 1870, they located to the Montezuma Well Ranch on Beaver Creek. The faced danger from hostile Indians, who stole their livestock frequently. Following a skirmish at Rattlesnake Tanks, the officers found a small Indian girl, two or three years old, abandoned by her tribe. The officers took the child to the home of the Arnolds, who raised her.

Ten years after moving to Beaver Creek, they moved to Squaw Peak in Arizona where they lived on an orchard/ranch which they named Flower Pot Ranch. In 1895, the Arnolds moved and built a home on what is now known as the Fain Ranch, which is in Prescott Valley, Arizona today.

Burial: Verde Valley Cemetery, located on private property, the Las Espuelas Ranch. Prior permission is required to enter the cemetery.