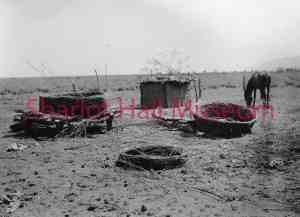 The Akimel O’odham or River People, also called Pima by the Spanish, inhabit the area around the Gila River in Arizona.  Similar to their neighbors, the Tohono O’Odham or Papago, the Pima people lived in an arid environment.  However, unlike the Papago, the Pima people benefited by living next to a river which allowed them to not only have access to fresh water, but provided them with the ability to grow and irrigate their crops.  The Pima are of the Uto-Aztecan language group and are believed to be descendants of the ancient Hohokam people.

Baskets are one of the oldest forms of storage and transportation of food and water. Grass was one of the most abundant natural materials available for basket making. Many baskets, particularly in the Southwest, were also constructed of yucca fibers, corn husks and willow.

Basketry began in the Southwest during the late Archaic Age (ca. 1800 b.c.e.). It was during this period that the cultures commonly referred to as Basket maker arose. These people were believed to have been the ancestors of the Anasazi and Mogollon.

Descendants of these cultures who excelled in basketry include the Akimel O'Odham (Pima), Tohono O'odham (Papago), and Hopi. The Apache and Dine (Navajo), who later settled in this region, became excellent basket makers as well.

There are three basic techniques involved in basketry. The earliest known is "twining", where the wefts or moving elements twist around the foundation elements or warps. Next is "coiling", where the base element is coiled and held in place by the warping element. Thirdly, is "plaiting", with the warps and wefts woven over and under each other in a particular pattern.

The Pima are well-known for their finely made coiled willow basketry. Because of their close proximity to the river, the Pima were able to harvest great quantities of willow to make their baskets.  Basket foundations were often made of local grasses or cattail and strips of devil’s claw (martynia) was used for the design elements. Baskets were generally woven with squash blossom, geometric fretwork or whirling wind designs, while some weavers used figurative images of humans and animals on occasion. The basket starts are made with devil’s claw and the rim was finished with a traditional herringbone weave. In early years, the Pima also wove large storage baskets made of wheat straw for storing their grains.