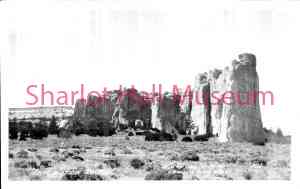 In the high desert, water is difficult to find, and a permanent spring that forms a pool is very rare indeed. The spring at the El Morro bluff, hidden at the base of a cliff, has flowed for a thousand years or more. The pool has served as an oasis for groups including Native Americans, Spanish conquistadores, and 19th-century emigrants, and they have all left their mark.

Hundreds of years ago, local Ancestral Puebloan people built dwellings on top of the mesa and farmed the surrounding land. Although they carved inscriptions and petroglyphs in the rock wall by the spring, their story has been mostly lost to time. The ancient Zuni Indians developed pueblos near water sources and large sandstone structures on which they carved the petroglyphs that still remain today.

Then in the late 1500s, men in steel suits with steel swords and lead shot came to conquer the land and the peoples that still lived there. One of the conquistadores, Juan de Oñate, was “given” the land to settle, which he did with a vengeance. After massacring and enslaving the people of the Acoma Pueblo, he left his mark on the wall of El Morro in 1605. It is one of the earliest markings by European colonists in America, 15 years before the Pilgrims landed at Plymouth Rock.

Oñate was followed by others. One soldier couldn’t resist adding to his commander’s inscription, “The 14th day of July 1736 passed by here the General Juan Paez Hurtado, Inspector,” with the addendum, “And in his company, the Corporal Joseph Trujillo!” Another name is that of P. Gilmer Breckinridge, a wrangler for the U.S. Camel Corps under Lt. Edward Beale.

In the years that followed, countless more soldiers and American settlers, both well known and lost to history, came through the desert and left their mark at this watering hole. There are now around 2,000 signatures at the base of the cliff, and the El Morro National Monument was established to protect this unique historical record.