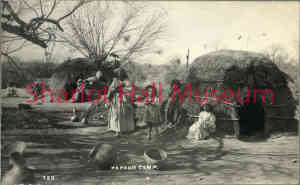 When the Spanish came upon them, they called them Papago, but the people themselves have rejected this name and officially changed it to Tohono O'odham in the 1980s. Tohono O'odham means “Desert People.”

Most Tohono O'odham Indians lived in wickiups. Wickiups are small round or cone-shaped houses made of a wooden frame covered with brush and dirt. These are very simple houses and Tohono O'odham people really only used them to sleep in.

The division of O’odham lands has resulted in an artificial division of O’odham society. O’odham bands are now broken up into 4 federally recognized tribes: the Tohono O’odham Nation, the Gila River Indian Community, the Ak-Chin Indian Community and the Salt River (Pima Maricopa) Indian community. Each band is now politically and geographically distinct and separate. The remaining band, the Hia-C’ed O’odham, are not federally recognized, but reside throughout southwestern Arizona. All of the groups still speak the O’odham language, which derives from the Uto-Aztecan language group, although each group has varying dialects.