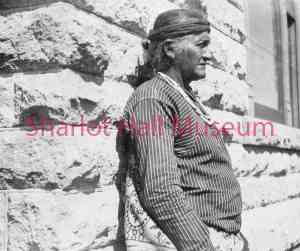 Navajo clothing for both men and women initially was deerskin for shirts and skirts. The men later wore cotton or velvet shirts with no collars, breeches below the knee, and moccasins. Women gradually wore the “squaw dress,” made of plain dark blankets.  Men, women, and children wore pendants of shell, coral, and glass beads.

Before the mid-19th century, Navajo clothing held more similarity to that of many other First Nations tribes on this continent. Both men and women wore deerskin clothes, such as skirts, shirts, and leggings.

Navajo men also traditionally wear a velvet shirt, as well as jewelry such as necklaces. Today, jeans are a common accompaniment to the traditional shirts, though breeches from thin material and deerskin leggings would have taken their place historically.  Both genders will also often wear a concha belt, with large silver conchas strung on a belt. Originally the conchas would be made from silver dollars, with scalloped edges, leather backing, and holes punched through. For headgear, traditionally a Navajo man would wear a headband, but hats similar to cowboy hats have also become incorporated as a common piece of traditional clothing, often with a bit of embellishment around the brim.

Native American Indian Jewelry has been found in excavations of prehistoric ruins. Bead making is an ancient craft. Bead necklaces are often called heishe, from the Santo Domingo word for shell. Seashells are the most common material used for beads. Seashells used in Native American Jewelry are Spiny Oyster Shell, Mother of Pearl, Abalone, Conch and Clam. They have been important trade items in the Southwest for over 1,000 years.