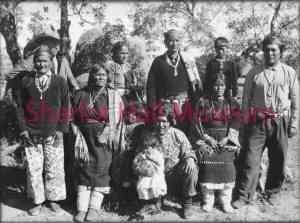 Navajo clothing for both men and women initially was deerskin for shirts and skirts. The men later wore cotton or velvet shirts with no collars, breeches below the knee, and moccasins. Women gradually wore the “squaw dress,” made of plain dark blankets.  Men, women, and children wore pendants of shell, coral, and glass beads.

Before the mid-19th century, Navajo clothing held more similarity to that of many other First Nations tribes on this continent. Both men and women wore deerskin clothes, such as skirts, shirts, and leggings.

Women also wore the “blanket dress,” a simple woven garment made similarly to a poncho. Weaving remains a central piece of Navajo culture to this day, though the craft shifted in the 19th century from making clothing to weaving the famous Navajo rugs.

A traditional outfit for a Navajo woman evolved to include a skirt and blouse, perhaps inspired by contact with the wives of European-American traders. From these trading posts, the Navajo in the late 19th and early 20th centuries purchased cloth like calico and velveteen in exchange for their high-quality wool and rugs. The full skirt is usually pleated and often tiered, made from calico, velvet, or satin, and the blouse is usually velveteen and decorated with silver buttons. Often in the past, the buttons were actually coins and might comprise a good portion of the woman’s wealth.

Deerskin moccasins, either ankle or knee-height, also remained an important part of Navajo clothing both before and after contact with Europeans.

Navajo men also traditionally wear a velvet shirt, as well as jewelry such as necklaces. Today, jeans are a common accompaniment to the traditional shirts, though breeches from thin material and deerskin leggings would have taken their place historically.  Both genders will also often wear a concha belt, with large silver conchas strung on a belt. Originally the conchas would be made from silver dollars, with scalloped edges, leather backing, and holes punched through. For headgear, traditionally a Navajo man would wear a headband, but hats similar to cowboy hats have also become incorporated as a common piece of traditional clothing, often with a bit of embellishment around the brim.