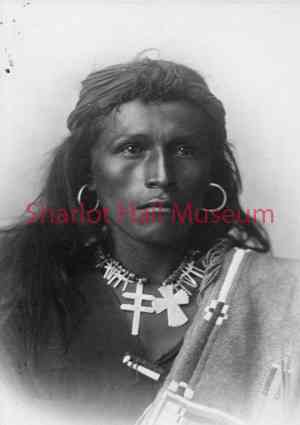 Navajo Tom Torlino, in Native Dress before he attended the Indian Training School at Carlisle Barracks, in Carlisle, Pennsylvania in 1882.  He entered the school on October 21, 1882 and departed on August 28, 1886.

Carlisle Indian School in Pennsylvania trotted this photo out for years as an example of what white man's education could do for the Indian.

In the "before" picture, taken in 1882, the handsome young Diné is a model of the noble savage, wrapped in a blanket, sporting a huge necklace, his long hair draping past his shoulders.

Three years later, his Western-style education nearly complete, the school photographed Torlino (a mistranscription of his Navajo name, Hastiin To'Haali) again. His sleek black hair is short and parted, he is wearing a suit and tie, and his skin tone appears to be several shades lighter than in the first photograph, as though his education actually had turned him into an Anglo (See Sharlot Hall photo 1504.0810.0002) (modern photography experts have speculated the photographer used a green filter when taking the original photograph to darken Torlino's skin).

The pictures were often used in conjunction with the school's assimilation-based motto: "Kill the Indian, save the man."

But the fact is, Carlisle never did kill the Indian in Torlino (although they did manage to accidentally kill dozens of western Indians, including two of Chief Manuelito's sons, when they were exposed to eastern viruses to which they had no immunity).

After graduating from Carlisle, Torlino returned to his home in Coyote Canyon, and picked up his career as a rancher and medicine man right where he had left off. Though he never grew his hair long again and had to endure the nickname "Hastiin Bilagáana" for the rest of his long life, he lived as a Navajo.

"He lived here all his life, with the sheep and cattle, and raised some very good racehorses," said one of his three surviving children, Francis Torlino, 83.

Tom Torlino used his newly acquired English skills often, however, and always for the people.

When his uncle, Chief Manuelito, needed a letter written, he called for Torlino and dictated it to him. When Manuelito wanted some help from the U.S. Army Corps of Engineers to design a water system for Coyote Canyon, Torlino was the go-between.

"He could put on a suit when he needed to, but he was just as comfortable in traditional (Navajo) clothing," Francis Torlino said.