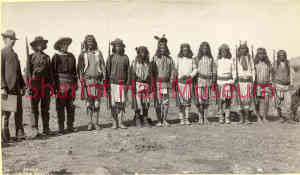 Mickey Free, aka Felix Tellis, aka Felix Ward was kidnapped by the Apaches as a child and raised as one of their own. He later became an Apache Scout for the United States Army.

Jones, a United States Military Academy graduate of 1872 was with the 10th Cavalry and in Arizona from 1886 to 1891 including service at Fort Apache in command of the Indian Scout company there from May through October 1887. He re-enlisted Mickey Free at least three times. (Cavalry Yellow & Infantry Blue, Constance Wynn Alschuler, p. 182-83.)

The Apache Scouts were part of the United States Army Indian Scouts. Most of their service was during the Apache Wars, between 1849 and 1886, though the last scout retired in 1947. The Apache scouts were the eyes and ears of the United States military and sometimes the cultural translators for the various Apache bands and the Americans. Apache scouts also served in the Navajo War, the Yavapai War, the Mexican Border War and they saw stateside duty during the Second World War.