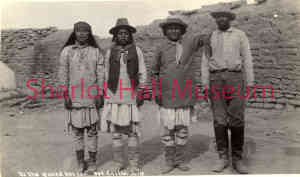 Three Apache men and an African American man in front of the guard house at the San Carlos Apache Indian Reservation.

The San Carlos Apache Indian Reservation, in southeastern Arizona, United States, was established in 1872 as a reservation for the Chiricahua Apache tribe as well as surrounding Yavapai and Apache bands forcibly removed from their original homelands under a strategy devised by General George Crook of using an Apache to catch an Apache.

In March 1875, the government closed the Yavapai-Apache Camp Verde Reservation and marched the residents 180 miles to the San Carlos Apache Indian Reservation.