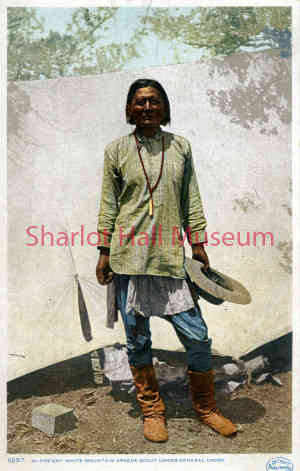 Chief William Alchesay, or simply Chief Alchesay was born May 17, 1853, in a part of the Arizona Territory known as Limestone Canyon and died on August 6, 1928, in Northfork, Arizona. He joined the Indian Scouts at Camp Verde on December 2, 1872,  and served under General George Crook in actions against an uprising of the Chiricahua Apache in the winter of 1872–1873, holding the rank of Sergeant. He was cited for gallantry, and acted as an envoy from Crook to Geronimo, trying to convince him to surrender peacefully.

As an Indian Scout, he received the United States military's highest decoration for bravery, the Medal of Honor, for his actions during the Indian Wars.

Alchesay was an adviser to Indian agents and to President Grover Cleveland. He fought again under General Crook in the campaign against the Chiricahua Apache in the Sierra Madre Mountains of Mexico in 1883 and his last military duty was as an advisor during the pursuit of Geronimo in Mexico in 1885.

The Apache Wars officially ended with the surrender of Geronimo in 1886 and Alchesay returned to his family and his home. He became a successful cattleman and farmer, living for a while in Forestdale and later in North Fork.

Plural marriage was an Apache custom, and was recognized by the U.S. government and he had two wives, Tah-jon-nay whom he married in 1871 and her sister, Anna in about 1881. However Chief Alchesay's first wife was a young Apache girl who bore him a son.

As a leader, Alchesay sought better conditions for his people in Washington, D.C. In 1887 he traveled to the Capital to speak to President Grover Cleveland. He met with President Theodore Roosevelt in 1909, and with Warren G. Harding in 1921. When the military left Fort Apache and Theodore Roosevelt Indian Boarding School was built in 1923 for Navajo children, Alchesay traveled to Navajo county to welcome Navajo children to the White Mountain reservation. He was instrumental in getting federal compensation for the families that were removed because of the school.

He and Geronimo remained close friends until Geronimo's death in 1909. He filed for an Indian Wars pension under the name William Alchesay and resigned from active chieftainship in 1925. Alchesay is buried on the Fort Apache Indian Reservation in Whiteriver, Arizona.