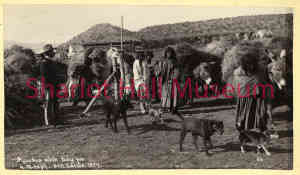 Apache is a collective name given to several culturally related tribes that speak variations of the Athapascan language. The eastern most Apache group was the Kiowa from Kansas and Oklahoma. The Lipan were from New Mexico and ranged towards the Texas coast. The Jicarilla lived in northern New Mexico and southern Colorado. The Mescalero inhabited New Mexico into Texas. Farther west, in New Mexico and Arizona lived the Chiricahua. Finally, there were the western Apache which consisted of five subgroups ; the White Mountain Apache, San Carlos  Apache, Cibecue Apache, Southern and Northern Tonto, all of whom resided in east central Arizona.

Early Apaches were a nomadic people, ranging over a wide area of the southwestern United States and Mexico. Because the climate was not conducive to farming, they were primarily hunter gatherers, although some practiced limited farming.

Most Apaches lived in wickiups, oval or round shelters made of brush. The wickiup’s outer covering changed with the seasons. Leafy branches were draped over it during summer and animal hides during winter to provide insulation. Because of the nomadic nature of the Apaches, these dwellings were designed to be temporary.

Most Apache clothing was made of buckskin. Women wore dresses while the men wore shirts and breechcloths, although in summer the men often went bare-chested.  Both wore high leather boot type moccasins. With the introduction of commercial cloth in the 1800s, the Apache began to adopt the dress of Mexicans and Americans. Men began to wear cotton tunics and pants while women wore calico dresses.

For centuries the Apache were known as raiders and fierce warriors. Their small bands and nomadic lifestyle made it easier for them to evade capture by the U.S. Army, but eventually they were outnumbered and by 1886 the entire Apache population had been relocated to reservations.

Camp San Carlos was a U.S. Army cavalry camp first established in 1873 on a previously occupied site on the San Carlos Apache Indian Agency, Gila County, Arizona. It was abandoned in 1900 and also known as Post at San Carlos.