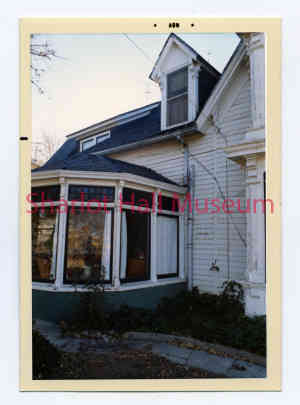 The Bashford House is connected to some of Prescott's earliest residents.  Coles Bashford, a former governor, attorney general, and senator from Wisconsin, came to Arizona with the party of the first territorial governor, John Goodwin.  Mr. Bashford was the first lawyer admitted to practice (1864) in the Territory of Arizona.  He was later appointed secretary of the territory by President Grant in 1869. The elegant Victorian home is named for his son, William C. Bashford.

Born in Wisconsin in 1853, William C. Bashford came to Prescott in 1874 to make his fortune in the mercantile business.  He later became a partner with his brother-in-law in the Bashford-Burmister Store, at that time well known throughout Arizona and the Southwest.  Bashford contributed greatly to the development of Prescott, as he helped to organize the Prescott National Bank and served as one of its directors.  He also served as Yavapai County treasurer and as Prescott City treasurer.

William Bashford married Mary Louise Evans in 1876.  Two years later, he bought from Samuel Baker an almost new house on the corner of Pleasant and East Gurley streets.  The price was $2,000.  It was a simple house with two stories, rectangular in shape, with an outside stairway.  The young couple enlarged and remodeled the house, and within ten years, added a large two-story addition perpendicular to the original house, tripling the size of the home.  The Bashfords also added fancy Victorian ornamentation and an all-glass solarium.

The 1891 catalog of C.S. Ransom and Company of Cleveland, Ohio, features the 1885 patented invention of Moses Younglove Ransom known as Moorish Fretwork.  Ransom's "design" patent covered the way that his milled helical moldings could be interwoven in multiple patterns.  The wooden solarium screens in the Bashford House feature Moorish Fretwork and also incorporate stick and ball patterns which were quite popular in fretwork grilles in the 1880s and 1890s.

Another feature is the fireplace with hand carved designs and unique tiles. An 1891 photo shows the non-functional fireplace with  encaustic tile made in Ohio at the Rookwood factory.

On display is a sample of the original wallpaper which had cheesecloth backing and was attached to the wall with large tacks.  In 1890 such embossed wallpaper was made in France.  Two wallpaper historians have indicated that it came from Paris due to the "fleur de lis" in the design.

William Bashford resigned from his mercantile business in 1895 to direct his energies to mining investments.  He and his family moved to California in 1905.

Later, other owners of the house made additional changes, lengthening the porch to run completely across the front and building a new solarium.  In the late 1920s and early 1930s, other changes were made, including new walls, additional kitchens and bathrooms to create six apartments in the house.

The house sat at its original location — 403 East Gurley Street — until its move to the Sharlot Hall Museum in 1974.  In April 1974 over a period of several weeks, house movers managed to jack the 160-ton house onto an enormous flatbed trailer and transport it a half mile west to its present site.

Two years later in May 1976, the restored Bashford House was dedicated and opened to the public during the Museum's annual Folk Arts Fair.

In 2010 a marble urn (jardiniere) that had belonged to the Bashfords was acquired by the Museum and re-installed in the solarium thanks to the generosity of the Toci family (which once owned the house) and several civic associations.  The Museum’s Facilities Department reinforced the floor to once again accommodate the beautiful 800-pound urn.

Today, the Bashford House has museum members and visitors coming to view the stained glass front doors, ornate fireplace and solarium fretwork on the last point of their tour.  Since the house serves as the Museum Store, books and Arizona handicrafts enlarge the museum experience.