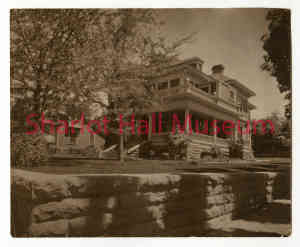 The Gage/Murphy house is a two and half story wood frame structure of asymmetrical floor plan. The outside dimensions of the original plan were about 60 feet by 40 feet. The hipped roof has many dormers, all of which were later additions except for a convex dormer over the old main entry. The second story deck on the porch has been enclosed. Detailing is derived from classical models. A semi-circular solarium is located on the east side of the house.

Ephilet B. Gage (b. 1839 - d. 1913) was a capitalist who made a fortune in the mines of Tombstone and Congress, Arizona. His partner for many years was Frank M. Murphy (b. 1855 - d. 1917), who is best remembered for his part in building the territory's railroad system. In 1895 Gage built himself a mansion on the south/east corner of South Alarcon Street and East Gurley Streets in Prescott, Arizona. Six years later he sold the property to his partner. The building is an interesting design for it appears to be an asymmetrical version of the Second Renaissance Revival. This information was obtained from the Arizona Historic Property Inventory.

Gage was born at Pelham, New Hampshire to John and Rebecca (Greeley) Gage on October 2, 1839. His mother seems to have been a distant relation to newspaperman Horace Greeley of "Go west young man." fame. A graduate of Dartmouth College, Gage first became involved in railroad and grain milling interests in Illinois but eventually followed his distantly famous inlaw's advice and headed west where in 1878 he settled in the notorious Arizona Territory boomtown of Tombstone. Here Gage pursued a career as a mining engineer and investor. He also became acquainted with Wyatt Earp and his brothers after the former Kansas lawman arrived in Tombstone in late 1879.

Alternative spellings of his first name is Ephilet and Eliphalet.