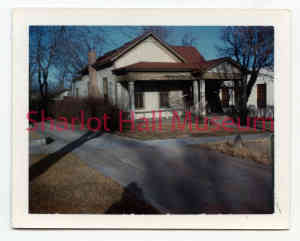 This house at 112 N. Mt. Vernon Street in Prescott, Arizona was originally built in the late 1800s and was home to three prominent Arizona residents.

It was the home of mining engineer John Frederick Blandy.  According to his September 23, 1903 obituary in the Arizona Journal Miner: "He was educated at the Royal Mining Academy in Friedberg, Germany, and has held some of the most responsible positions in the mining industry of the United States, and was considered as one of the best authorities in that line in the country.  He was engaged in mining in the Lake Superior country for several years, and was a contributor to the technical literature of mining and geology.  He had also a wide experience in the coal fields of Pennsylvania.  In 1881, he came to Prescott and since that time the west has been his home.  He was for a time territorial geologist of Arizona and has written many articles on the mining industry of Arizona."

The house was later occupied by Colonel Alexander O. Brodie at the time of the Spanish-American War. Brodie was with the famous Rough Riders and was later Territorial Governor (1902-1905) appointed by Theodore Roosevelt.

Lewis W. Douglas lived in this house for a time as a child.  Douglas, the son of Jerome mining executive James Douglas, later became Director of the Bureau of the Budget under President Franklin D. Roosevelt, and served as Ambassador to the United Kingdom from 1947-1950.

Later, the house was owned by George Edward Meany, local banker and son-in-law of prominent railroad man W.A. Drake.  He died in 1928.